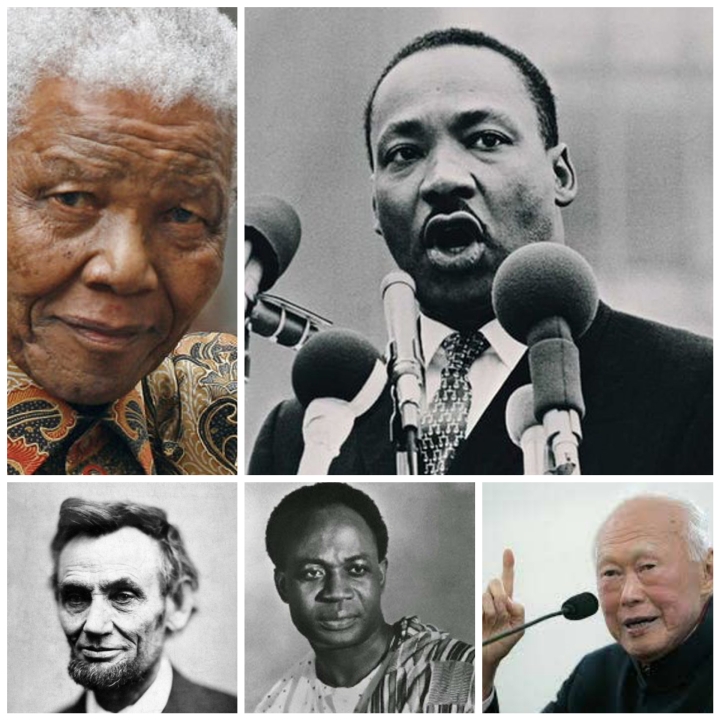 Do you want to know some of the qualities to look out for in a political leader? Then this article is for you.

When we vote a person into power we give them the mandate to represent us and make decisions on our behalf which will affect the well-being of all citizens.  We also put them in charge of national resources (cake) so they get to decide who receives what.

When it comes to great and effective politicians each country has its own political icon to which they measure other leaders to.  These individuals are considered as a yardstick to which upcoming politicians must measure up to.

For example,  Kwame Nkrumah of Ghana, Nelson Mandela of South Africa, Muammar Gaddafi of Libya, Lee Kuan Yew of Singapore, Abraham Lincoln of the United State, and  Martin Luther King Jr. are all considered as great political leaders in their respective countries and some even transcend the borders of their nations to gain worldwide admiration for their quality leadership.

One may ask then, what makes these leaders truly great and effective, and such forces to reckon with?

Although these leaders may equally have their own shortcomings nonetheless they have made significant contributions to the advancement of their respective countries and the entire human race that their impacts cannot be overlooked.

This article will looks at the common denominator qualities possessed by these leaders that distinguished them. This will in turn equip us with the right infromation and give us the opportunity to make good choices when it comes to exercising our franchises to vote.

Below are 7 Qualities Of Great And Effective Political Leaders.

1. Greater Good Thinker and Selfless: Every great and effective political leader should be willing to fight for the greater good of all and not just the good of a few elite. And it is this particular quality that really distinguished the likes of Nelson Mandela, Dr. Kwame Nkrumah,   and Abraham Lincoln among others.  These men have been able to put their country’s first, even the freedom of all in most cases. When a president or senate wins an election, he is no longer just the representative of his political party. But he becomes a representative of the entire country. And is his duty to take care of all whether they belong to his political party or not. To serve for the greater good, which is the mark of true leadership.

2. Visionary and Generational Thinker: Great and effective political leaders are always thinking of how to make impacts that will transcend their term of office, transcend generations and even stand the test of time. As opposed to the ones who think temporarily of how to manipulate the system and just get them elected in the next election. A great political leader is one that guarantees that the future generations of his/her country are taken into consideration when making decisions. This is how you identify the leader worthy of your vote.

3. Strong Character and Firm: Another distinguishing feature of the aforementioned leaders is that they were firm in character and stood by what they said and have a conscience to act in favor of the greater good of all than just a few elites. At most these leaders were men of integrity, their yes is yes and their no is no.  An effective leader is someone who has the courage to say what needs to be said instead of chickening out and telling the public what they want to hear. A leader who is not firm and without a strong character you’ll notice that he will say one thing today and say something else tomorrow, they lack consistency in their talks and actions.

4. Accept Responsibility and being Accountable:  Taking responsibility and accepting the part we played in a situation is not something that comes naturally to most people. However, a political leader does not have an option for not being responsible or accountable. It is the noble responsibility of our political leaders to be accountable to us as their citizens. Being honest and transparent as much as possible with the decisions they take on behalf of the citizenry. A  leader who doesn’t possess these qualities of accountability and accepting responsibility, point fingers at everyone else for a problem, but never themselves. And they always try to cover up things, and anytime you listen to them you know that there’s still something more that they are not saying.

5. Great knowledge base coupled with walking the talk: One quality of a great leader is that he should have some significant amount of knowledge base, either from experience or from being well-read or both.  A leader should have demonstrated that he does what he says, thus, he walks the talk. And puts he’s energy and resources (money) where his mouth is. It is very tragic to have a leader who doesn’t have significant experience or knowledge because for him anything goes and  he will not be able to make discerning decisions. In worst case scenarios he may not be able to tell if he’s been given a wrong or good advice.

6. Go out into the field and manage directly: Another distinguishing feature of these great leaders is that they have their ears on the ground and listen to the needs of the average citizens. They do not only show up when it’s time for an election. But they are with the citizenry through it all, in the good times and bad times.

7. Emotional Intelligence and Good Communications Skills: Great and effective leaders know when to talk and also when to just keep quiet and listen. They  know and understand that they do not know it all so they surround themselves with skilled men.  An effective leader is able to read and access the mood of those around him and his citizens to decipher what they need.  And as such is able to overcome challenges and dissolve conflicts.